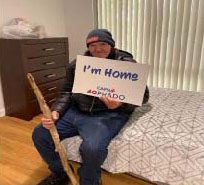 In the month of September 2020, five single people and one family of seven were housed through the 40 Prado Case Management programs! One of the single people housed was 70 year-old Steve, who had been living at the 40 Prado shelter for over a year. Steve was struggling to manage his mental and physical health issues and had difficulty walking without falling due to an injury to his feet many years ago. Steve had been homeless 35+ years with limited Social Security income, so he found it very difficult to secure permanent housing that met his needs. He had accepted that he was going to be homeless for the remainder of his life and just learned to deal with it each day. Steve then began working with the Case Management program at 40 Prado and was able to see a specialist to obtain appropriate shoes. He was also able to obtain regular medical care and his medications through the onsite CHC Clinic.

Steve needed permanent housing with some supports in place to ensure his mental and physical health remained stable. Fortunately, his Case Manager at Prado was able to work collaboratively with TMHA and their permanent housing programs to get Steve accepted into the RAD housing here in San Luis Obispo. After years of living on the streets and in shelters just trying to survive each day, Steve is now safely housed with continued Case Management support!